Green’s is an Australian owned food manufacturing company that has been producing and distributing food products at their Sydney plant since 1978. Green’s operates under leading brand names including Lowan, Poppin, Basco and the old time favourite, Lolly Gobble Bliss Bombs.

Green’s has enjoyed the use of Champion Compressors for a very long time and recently made the decision to purchase three new Compressors. These Compressors were to replace two 37kW Champion Compressors (which had served the company well for over 20 years), as well as a 75 kW Champion Compressor, which had also served the company for over 15 years and clocked up over 100,000 operational hours. Green’s replaced the three long-serving Compressors with two standard Champion and one Variable Output Controlled Champion Compressor. In deciding to purchase these Compressors, Green’s gave particular consideration to their proven reliability, energy efficiency and Australian design, well as the quality support service they had previously experienced from Sullair. John Hadzic, Process Improvement Engineer at Green’s explained his purchase decision: “The longevity of Champion compressors has been amazing. The product sells itself. Champion compressors have served us so many years with minimal service requirements, which made our decision to choose Champion an easy one.”

In the vital early stages, Sullair arranged introductions, site visits and consultation with the both the equipment/pipework installer and roofing/ducting contractors. Advice, feedback and recommendations provided by Sullair and its contractors allowed Green’s to evaluate the project and ensure that the company did not face any surprises in the implementation phase. The layout for the new equipment underwent eight iterations before consensus was achieved. Milestones included: simplification of the pipework layout, air flow to compressors and exhaust, access to all equipment, WHS compliance, and ease in removing equipment for future upgrade/replacement. Sullair recommended replacing the solenoid operated drain valves to Spirax Sarco (R) mechanical drain valves, due to the corrosion in the receiver, which resolved problems with drainage blockage. Installation Prior to pipework installation, Sullair placed the equipment on the floor and allowed Green’s time to approve the locations. This allowed for adjustments to ensure adequate access for cleaning around the equipment and maintenance, visibility of controls and better utilisation of existing cable trays and penetrations. Green’s continued with the use of standard copper pipes for large diameter piping under the recommendation of Sullair. Copper is versatile, easy to repair and modify, and is unaffected by carry over lubricants used in the compressors. The installation of exhaust ducting was a key component of this process, which guarded the Compressors against overheating. This installation required removing large extraction fans, replacing roof sheeting and the manufacture of skewed transition pieces to link the compressor exhaust to the ducting. This installation benefitted from the quality of workmanship and the contractor’s willingness to discuss and implement changes on the run, such as reusing the old filters in the bypass line (which was not in the original scope).

After the commissioning of the plant, the contractor returned to site to inspect the system in operation. On inspection, the contractor was pleased to report that the doors are closed on the plant room and all forced ventilation has been removed and the compressors consistently run around 20 degrees below their overheat trip temperature. In addition, Green’s have now joined the Sullair “Partner Care Service Program” to ensure peace of mind for their compressed air requirements. 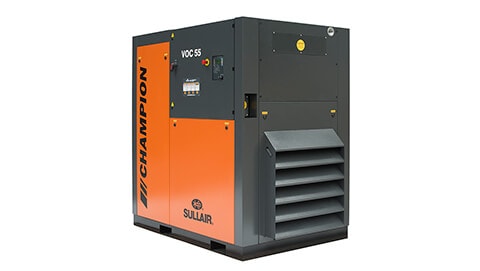 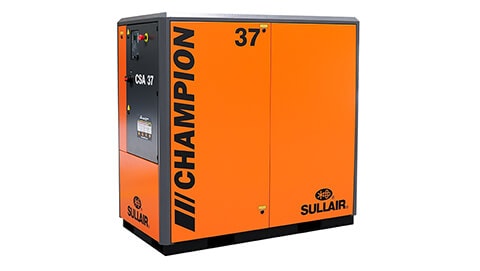 Let us help you find the right compressor for your needs

Let us help you find the right compressor
for your needs